Pogue’s Run Trail is a 5.3 mile greenway corridor planned on the near northeast side of Indianapolis. The trail starts on 10th Street at the Monon Trail and the Indianapolis Cultural Trail, heads northeast along Brookside Avenue then follows Pogue’s Run waterway until heading north along Olney Street and east on 21st Street to end at the Pogue’s Run Art and Nature Park.

The trail passes through many iconic areas of the Near Eastside. Along Brookside Avenue it passes the Circle City Industrial Complex and Fletcher Park. It winds through Spades Park and bird sanctuary and over the historic Nowland Avenue Bridge. In Brookside Park it traverses playgrounds, a disc golf course and the Family Center.  It concludes at Pogue’s Run Art and Nature Park a constructed wetland with local art throughout. First identified in the 1994 Greenways Master Plan, the Pogue’s Run Trail has long been anticipated. The completion of the trail has been highlighted as a priority on two key planning documents: the Full Circle Master Plan, which provides guidance and direction for all future greenways in Indianapolis and the Near Eastside Quality of Life Plan that outlines key projects to improve the near eastside of Indianapolis. In addition to these plans, neighborhood groups, the City of Indianapolis and organizations like Reconnecting to Our Waterways, the Central Indiana Community Foundation have met and collaborated on ways to fund the completion of the trail.

Why The Trail Is Important

Mixed use trails have tremendous potential to catalyze development and growth in a neighborhood. The transformative growth in the Fletcher Place and Fountain Square neighborhoods are in large part due to the development of the Cultural Trail. Years earlier, similar development and economic opportunity followed the Monon Trail through Broad Ripple and midtown Indianapolis. Completing the Pogue’s Run Trail will create a similar opportunity for the Near Eastside of Indianapolis. The trail will:

Pogue’s Run Trail can play a critical role in improving livability and connectivity in the community. Along with other positive momentum in the neighborhood, this can catalyze investment and increased economic activity. 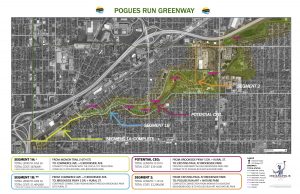